Celebrate the people, the place and the wines

Premium wine event of the 2015 Barossa Vintage Festival
Presented by the Barons of Barossa.

Join the exclusive wine fraternity, Barons of Barossa for dinner.
Exclusive tasting of wines prior to the Barossa Wine Chapters Auction.

The Barossa Grand Cellar Dinner - a taste of the Auction. Taste some of the finest wines of the Barossa and talk to the winemakers. Savour the exquisite matching of wine and food.
Going to the Barossa Wine Chapters Auction?  Taste some of the wines tonight before you bid.
MC for the evening is Andrew Caillard of Langton's Wine Auction House.

Barons of Barossa declare the 2015 vintage

On a sweltering 40 degree day, the wine fraternity Barons of Barossa carried on their tradition to Declare the 2015 Barossa Vintage. After Pastor David Gogoll presided over the blessing of the grapes in the historic Tabor Church, the Tanunda Town Band led the traditionally robed members of the wine fraternity to the Rotunda. The celebration continued with a ceremony that included the announcement of the Barossa winemaker and vigneron of the year.

Ben Radford was named 2015 Barossa Winemaker of the Year. Ben was born and bred in the Barossa and has had considerable winemaking experiences in Europe and South Africa. Now Winemaker and Managing Director at Rockford Wines, Ben is celebrating his tenth vintage with this iconic Barossa winery. He said, "œI have had two great mentors in Jim Irvine and Robert O'Callaghan and hope that, in the future, I too can be a mentor to the next generation of the Barossa."

The 2015 Barossa Vigneron of the Year is John Kalleske. A 6th generation Barossan, John has never used any chemicals in his vineyard and has been a constant advocate for biodynamic farming throughout his career.

L to R services to the Industry Award winner James Nitschke, Vigneron of the Year John Kalleske, Winemaker of the Year Ben Radford.

In her forecast of the 2015 vintage, Louisa Rose said, "œHarvest has started in many varieties on the Barossa floor, and also in the Eden Valley, and it is coming in quickly! Whites are showing delicate flavours and lovely natural acidity, and reds strong colours and rich flavours.

"œThe forecast for the next week looks perfect for ripening, and if this continues vintage will keep going at a lively pace, grape growers and winemakers will be sleep deprived, but the result will be that 2015 is remembered as a great Barossa Valley and Eden Valley vintage."

The late Herman Thumm was honoured with a plaque to be placed on the Barons Wine Walk of Fame, honouring a late Baron who has made a major contribution to the Barossa. Representing the family, his son Dieter said, "œHT survived many hardships overseas before coming to Australia. During the war, he was confined in an internment camp in the Riverland but he was unstoppable; he even made sparkling wine in the space under the floorboards of his barracks!"

James March, CEO of the BGWA, announced Jamie Nietschke as the recipient of the "œServices to Industry" Award. 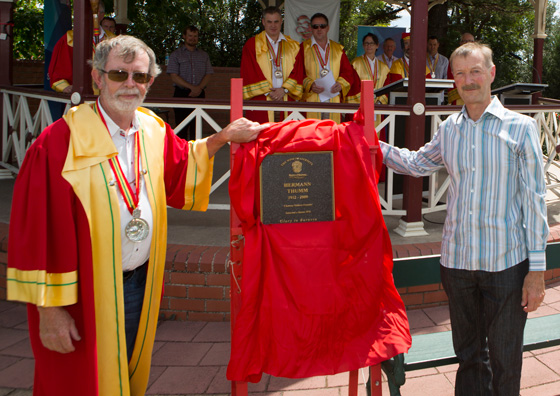 The Barons of Barossa are a step closer to their vision of a home for the Barossa Grand Cellar with last week's approval by the Barossa Council.  Stephen Henschke, the wine fraternity's Grand Master said, "Thanks to the Barossa Council, we can move ahead with building a home to preserve the Barossa's wine heritage.  It will be a facility for the entire region and a place to showcase the fruits of our labour."

The Barons of Barossa launched the concept of an independent collection of the region's finest wines, to be aged for a minimum of 10 years and released for tastings and events in the Barossa and throughout the world, at the 2013 Vintage Festival.

The Barossa Grand Cellar, designed by Jamie Gladigau of JBG Architects in Tanunda, will be located on Stockwell Road on land purchased from Leo Pech. It is a striking design that, combined with the elevated site overlooking the Valley floor, will create a stunning landmark for the region.

"œThe building is designed specifically to provide a low energy, visually stunning yet discreet facility to preserve Barossa wine stocks. It seemed natural to bunker the building into the Barossa Ranges, and minimise the exposed faÃ§ade to local traditional materials of stone and wood - after all, Barossa wine comes from Barossa dirt," said Mr Gladigau.

James March, CEO of Barossa Grape & Wine Association, is enthusiastic about the project.   He said, "œThe Barons are to be congratulated for pursuing this vision and to seeing another 'Big Idea' for the Barossa being realised. The Barossa's ability to present wines to an international audience that have been perfectly cellared is a fantastic competitive advantage and a welcome development on behalf of the region."

This building will be more than a wine cellar; it will be a facility for the entire Barossa and serve as a showcase for the Barossa wine community.  Along with the Cellar and tasting facilities, it will have exhibition space for interpretive displays of Barossa Winemaking, Wine Grape Growing and the heritage and history of our community.

"There is no other regional wine museum existing in Australia," Mr Henschke added.  "œWe foresee that it will become a globally recognised site and be a strong contributor to the positioning of the Barossa as a world-class region of fine wine."

The wine fraternity is seeking support for this impressive undertaking and encourages the community to consider how they can contribute to the project.  The Barossa Grand Cellar Ltd is currently seeking tax deductible status.