Steve Lienert is Barossa born and bred. He was immersed in "wine country" and fast became an oenophile and followed his father into the wine industry in 1978.

Steve Lienert is Barossa born and bred. He was immersed in "wine country" and fast became an oenophile and followed his father into the wine industry in 1978.

Steve started his career at Penfolds and embarked on a natural evolution with the company, taking on roles in the Cellar, Laboratory, White Wine Department, Fortified Wines and in 1988 - the Red Wine Department. His is currently the Senior Red Winemaker.

He is a major player in maintaining the wine styles and traditions of Penfolds and has a wonderful track record in promotional activity - especially in the USA and New Zealand. His work takes him to international tastings and he was part of the New York Panel to taste the complete series of Grange  and Koonunga Hill wines for the seventh edition of Penfolds ultimate form guide, The Rewards of Patience.

He lists the 1986 Bin 707 Cabernet Sauvignon and 2008 St Henri Shiraz amongst his favourites.

The Barons of Barossa congratulate Steve Lienert - 2016 Barossa Winemaker of the Year. 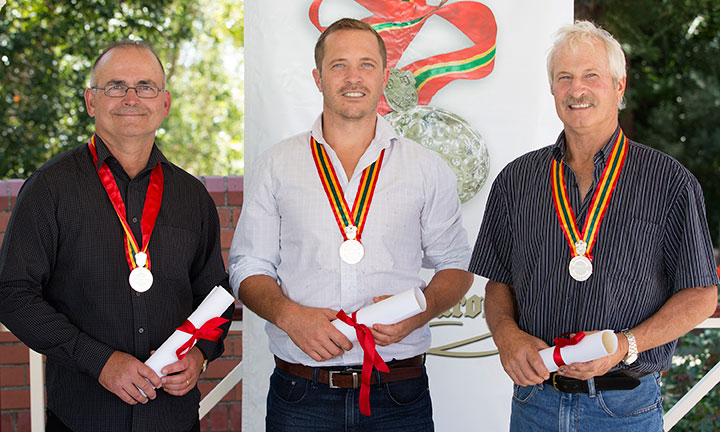 From left, Steve Lienert 2016 Winemaker of the Year, Ryan Fromm and Trevor Fromm 2016 Vignerons of the Year.

Father Trevor and son Ryan are third and fourth generation Barossa vignerons. Their vineyard is situated at Williamstown on property settled in 1895 by Charlie Fromm and the first grapes were planted in 1919. Today the property has increased to 140 acres supplying 8 different wineries with 10 different varieties.

Trevor says one of his greatest achievements is being involved in growing high quality grapes 100 years on from the first plantings. While the early years were very labour intensive before mechanisation he embraces new technology and plans to leave the land in better condition for the next generation through sustainable viticulture.

He is particularly proud that he has never used, or owned, a rotary hoe.

Ryan was always eager to start work with Dad and Grandpa and was encouraged to gain as much knowledge as possible which resulted in him attending just about every Grower seminar. He also did a TAFE Viticulture course and was a member of the inaugural Next Crop. His involvement in resurrecting the original Shiraz vines planted in 1919 is a personal highlight.

Father and son are constantly striving to improve the vineyard with the use of sub surface dripper irrigation, supporting biological farming methods and developing native vegetation zones.

Their ambition is to consistently grow quality grapes for the wineries and to work together with all generations of growers and winemakers by passing on and sharing their knowledge which they believe is so important for the future of the Barossa.

The Barons of Barossa congratulate Trevor and Ryan Fromm - 2016 Barossa Vignerons of the Year.